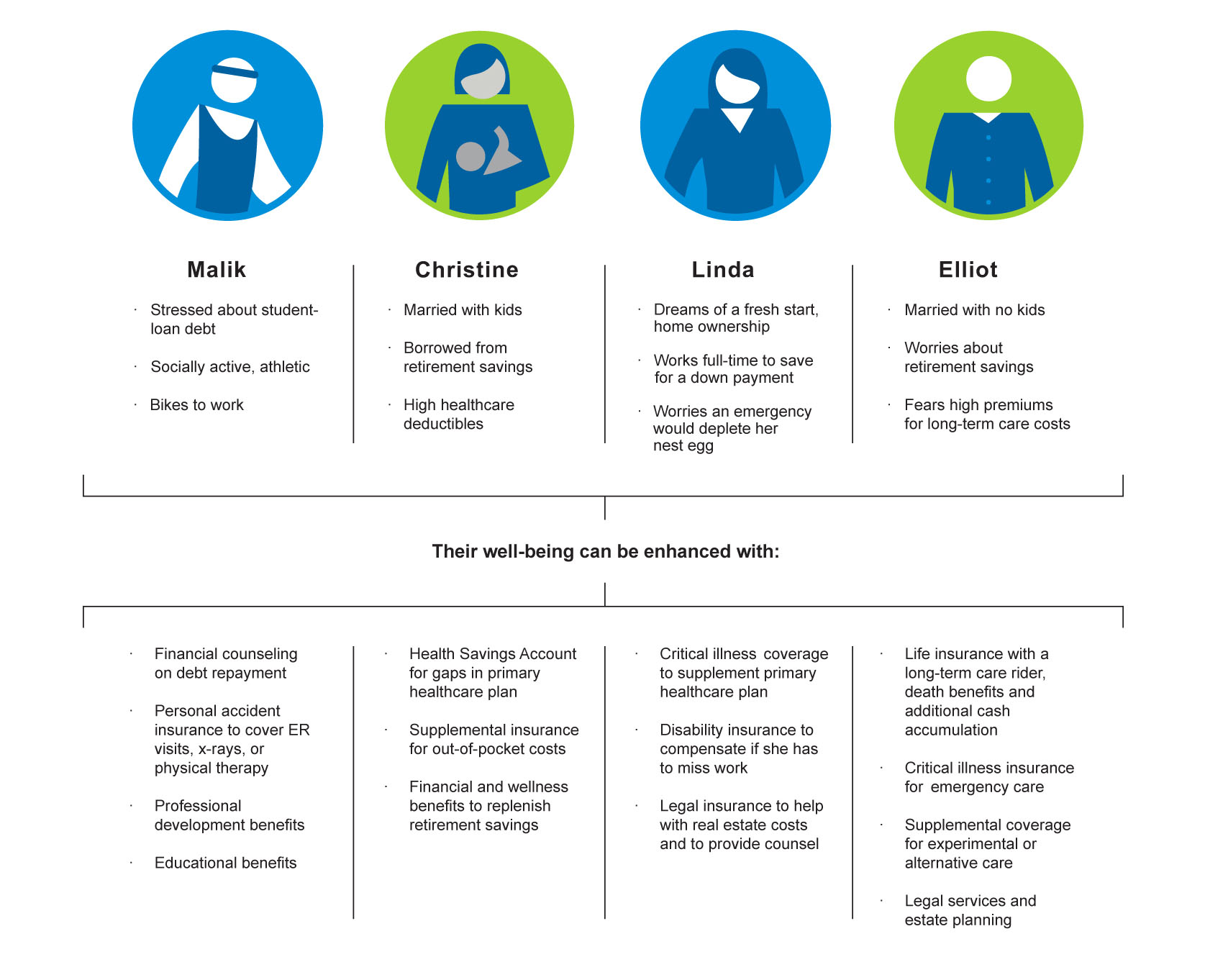 Do you want this infographic?

Creating a Cycle of Enrichment in Work and Life

The Road to a More Human Workplace

Create a More Human Workplace through Key Moments of Meaning

Every employee works, not just to pay the bills, but to pursue their dreams, from buying a home to paying for education to retiring on schedule. Investing in these kinds of goals helps employees remain engaged, focused and loyal to their employer.

But unexpected medical costs can derail big picture plans, since employer-provided healthcare insurance does not cover everything. While people are traditionally advised to “save more,” most are unable to set aside enough money to pay for even minor emergencies. Consider these facts:

The financial, physical and emotional distress emergencies cause can lead to disengagement, ongoing health issues and, sometimes, life-changing disruptions that directly impact productivity and employee retention. If they don’t take steps to protect themselves, employees put themselves, their familes and their dreams at risk.

Voluntary benefits can provide essential financial support when it’s needed most. With a high probability of being used, they can serve as a guardrail that keeps employees on track. 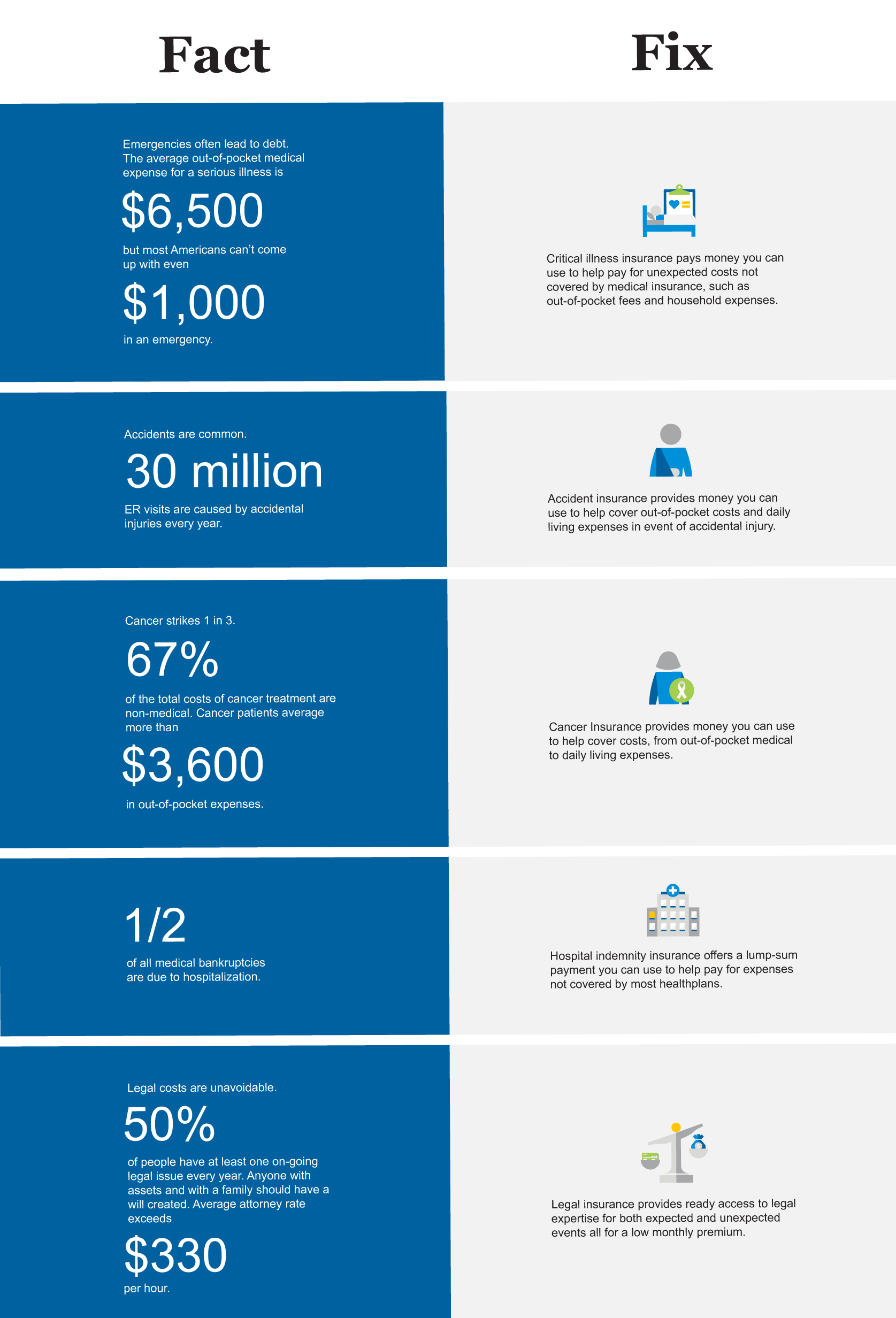 Do you want this infographic?

The Power of a Comprehensive Benefits Offering

How employers can realize the full impact from benefit plans

Today, high employment rates, the war for talent, changing demographics, and an increasing need for financial stability are reshaping employee expectations and job satisfaction. For many employers, this is a growing challenge; in fact, 42% say employee engagement is an active concern.1

Employees Confidence about their benefit Choices

Having confidence about their benefit choices motivates them to remain invested in their work.3

But today, many employers aren’t experiencing the full value and impact of their benefits packages, because employees don’t completely understand the products available to them, and how they can work together to cover their needs. This is especially true for voluntary benefits—which includes supplemental health (accident insurance, hospital insurance, critical illness insurance and cancer insurance) and income protection (disability insurance, legal plans, and life insurance)—because employees don’t always recognize the role these benefits play in helping to ensure financial wellness.

Many employees believe their medical insurance covers them for all health-related situations, but don’t consider the impact co-pays and deductibles could have on their finances when enrolling for benefits. They’re also not aware of how unexpected costs incurred during an illness or accident can affect living expenses and daily life.

Percentage of Americans under 65 who had trouble paying their medical bills in the past year, even though they had medical insurance.

Of those, 63 percent used up all or most of their savings to pay their medical bills. 5 And while the associated financial stakes are high, medical setbacks are unfortunately common—cancer strikes 1 in 3 people, and there were 30 million ER visits caused by accidents last year. The financial, physical and emotional distress that these hardships cause can lead to disengagement, ongoing health issues, or life-changing disruptions—any of which can be stressful and cause employees to be less productive at work. If they don’t take steps to protect themselves, employees can put themselves, their families and their dreams at risk.

And while employees are missing opportunities to protect their financial well-being, employers are missing the chance to increase understanding of the value of benefits and improve employee satisfaction. To fix this, employers need to shift how they build and communicate benefit packages to focus on showing how benefit offerings fit within the context of employees’ lives.

This requires employers to look at benefits from the employees’ point of view—how will benefits best meet their needs? What will help them avoid the financial stress that comes with costs not covered by basic healthcare plans? By taking a step back to see how voluntary benefits can positively impact employees at various life moments, employers can drive greater clarity, understanding and ultimately, engagement.

In this guide, we’ve used insights from our ongoing research with employers and employees to identify effective ways to design and communicate voluntary benefits

Liked what you read?

The Economics of Employee Happiness

In the early 1990s, however, Dr. Oswald, now a professor of economics at the University of Warwick in England, began to probe the economic and social roots of happiness and mental health. It was an unusual line of research at the time, but the conclusion it reached – that subjective personal matters do correlate with more objective metrics in meaningful ways – spawned a whole new category of social science inquiry.1

The High Cost of Disengagement

The “economics of happiness,” as it is sometimes called, changed the conversation about the relationship between employer and employee. By one reliable estimate, unhappy, disengaged, distracted workers cost U.S. businesses up to $550 billion annually in lost productivity and turnover.3

Employers today need to pay more attention to the emotional and financial well-being of their employees than in the past. The world is increasingly about services and person-to-person interaction.

The Role of Employee Benefits

Oswald emphasized that there is good evidence linking employee benefits and engagement, especially to the extent that “having a better safety net in place for dealing with life’s unexpected plot twists can improve someone’s emotional and mental fitness.”

*Based on an interview with Prof. Andrew Oswald conducted in July 2018.