Inflation in the United States continues at a rate not seen for nearly 40 years: 7% for 2021 according to the U.S. Consumer Price Index report for December, the largest annual increase since 1982.1 Inflation has significantly decreased real returns for both Stable Value and Money Markets. The chart below compares the growth of $100 invested in Stable Value and Money Market for the ten year period ending 4/30/2022, adjusted for inflation. Over the past ten years, investments in Money Market Funds have consistently lost purchasing power, exceeding 15% over the period. Stable Value investments have been able to maintain their value in real terms until the recent dramatic COVID-related spike in inflation.2 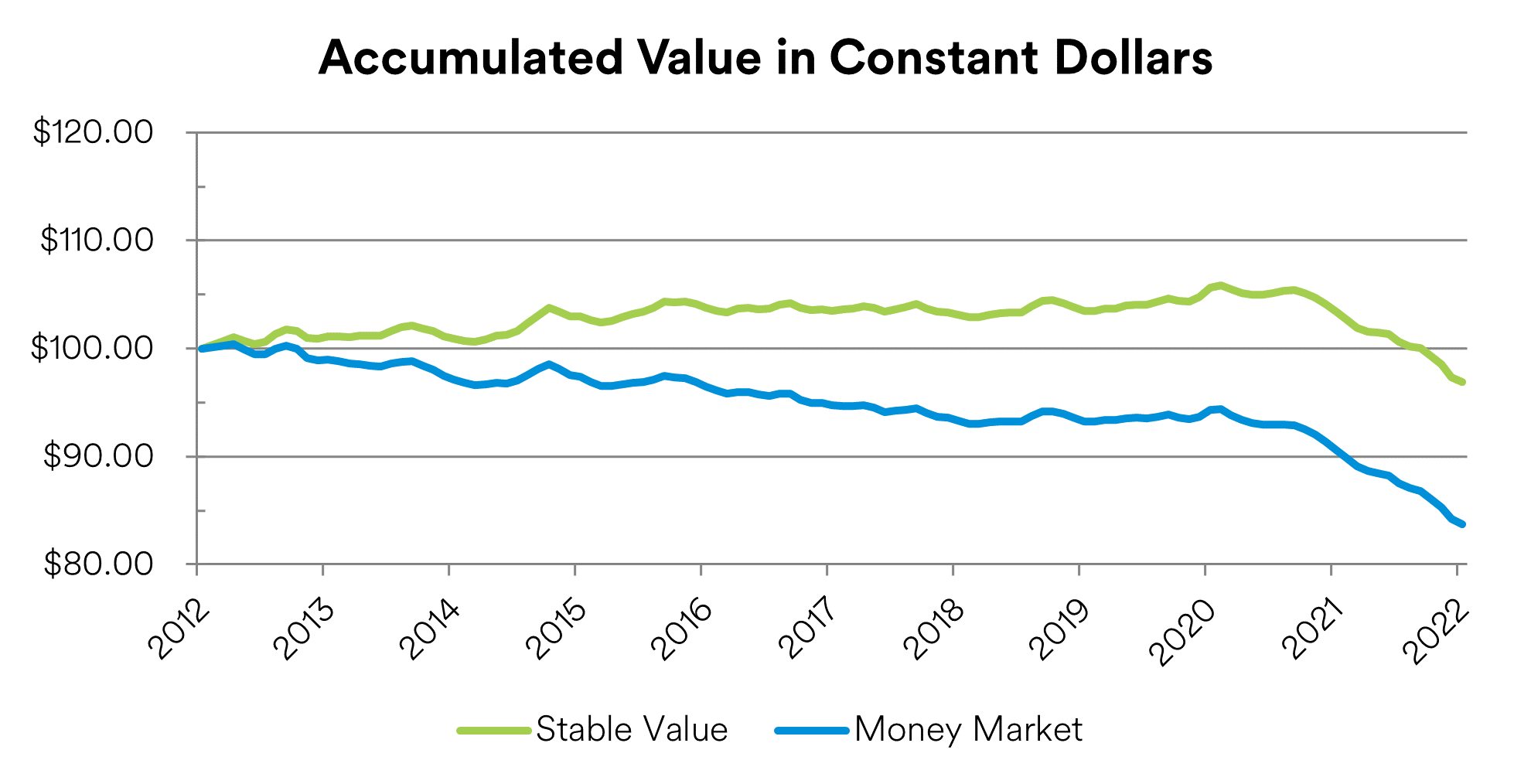 In terms of direct control, the Fed can only set the Fed Funds Rate. This is the rate that banks charge each other to lend excess reserves overnight. Changes in the Fed Funds Rate have a significant effect on short-term interest rates. The Fed can also influence interest rates at longer points of the yield curve through Open Market Operations or Quantitative Easing. This is when the Fed buys (or sells) Treasuries or other assets in the market. Just prior to the March 15th Federal Open Market Committee (FOMC) meeting, the Fed ended the Quantitative Easing that had been in place since the start of the pandemic. At the March meeting, the Fed raised rates by a quarter percent followed by another half percent increase during the May meeting. Now with the release of the May meeting minutes, expectations are that rates may be raised by half percent increments at the June and July meetings.3

So how does this affect today’s yield curve? How do we know what is “priced in” already? In short, already “priced in depends on expectations about future interest rates. For example, the graph below shows 3-month Treasury Rates since the fourth quarter. The 3-month Treasury yield, being a short-term and extremely low risk asset, is heavily influenced by a change in the Fed Funds rate. Until late December, the rate had been fairly constant at 5 bps. As inflation and other economic data came in, market participants became more convinced that the Fed would have to raise rates. The yield has risen along with expectations. The Fed decided to raise rates by 25 bps at their March 15th meeting and then 50 bps at the May 4th meeting which matched market expectations. However, the Fed released a new dot plot, indicating additional rate hikes for 2022, and the 3-month treasury has since continued to climb, reflecting expectations that the Fed Funds rate will continue to increase in the near term.

The next graph is of the 10-year Treasury yield.  As a long-term rate, the yield reflects expectations of not only the upcoming rate decision, but future ones as well. We can see that predictions of the distant future are far more uncertain and thus much more variable. The rise in rates from early January to May was approximately 150 bps, higher than the rate increases from March and May of this year. This reflects the expectation that June will not be the end of the rate hike cycle.

Market Yield on US Treasury Securities

Stable Value Funds, on the other hand, invest in the intermediate part of the yield curve and use an insurance contract known as a “wrap” to provide the guaranteed crediting rate and principal protection. The normal yield curve is upward sloping. As a result, investing in longer term assets has inherent return advantages. However, this also means that the assets do not turnover as quickly and crediting rates react more slowly to yield changes. The Stable Value wrap takes into account the market values of the assets along with current yields to calculate the guaranteed crediting rate.

During times of market uncertainty, many investors might consider it prudent to protect a portion of their assets with Stable Value. Because Stable Value is an investment option in a DC plan with regular ongoing contributions, those contributions get invested at higher yields as rates rise, helping to mitigate the impact of the rate increases on the portfolio and the crediting rate. For DC plan participants, Stable Value provides full liquidity, principal protection, and a guaranteed interest rate.

Keep risk down with a stable value option that steadily rises.

2Stable Value numbers represent Stable Value returns actually credited to participants for MetLife clients who allowed us to use their data. This data may not be representative of returns for the asset class as a whole. Money Market numbers are the weighted gross government rates obtained from sec.gov minus the average expense ratio of large Money Market providers